Eggs- love them or hate them, they are undeniably one of the easiest things to cook.  I've found myself on both sides of the egg divide.  When I was younger I couldn't stand the whites of eggs, and would only eat the yolks runny with toast dippers.  As I've gotten older I've come around to fully embrace eggs, but even though I fully appreciate a good hard boiled, poached, or fried egg; I do find that they can get a little boring.

I was completely blown away when I saw the picture of this recipe on foodgawker. 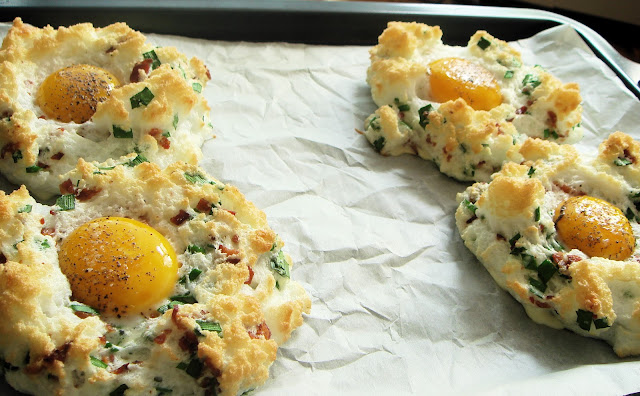 Yes, the entire thing is an egg.  Well, an egg with some mix-ins, but an egg nonetheless.  The yolk is nestled in a little cloud of whipped egg white.  I found the idea so original and whimsical, I knew I had to give it a shot. 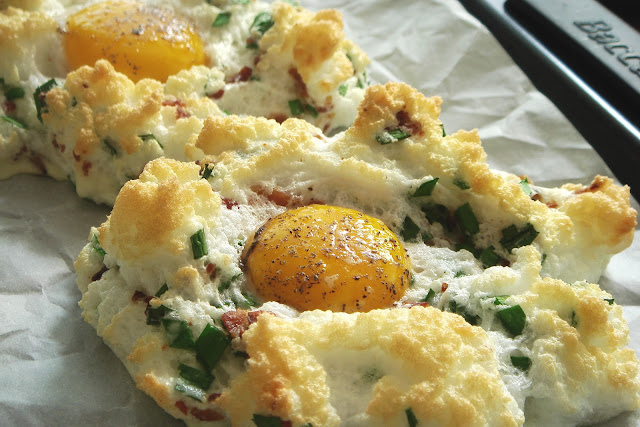 The recipe is a little more complicated than most recipes, but it is still pretty easy and quick.  So it is undoubtedly a beautiful dish, but how does it taste?  The texture is very different than any egg I've ever had before- it's simultaneously light, spongy, and tender.  This version is loaded with garlic chives, bacon, and pecorino romano.  A perfect combination that makes this one deliciously savory breakfast treat.

Directions
1.  Preheat oven to 450F.  Separate egg whites from yolks, putting whites in one large bowl and yolks in 4 small separate bowls.
2.  Whip egg whites until stiff peaks form.  Carefully fold in chives, cheese, and bacon.
3.  Place 4 separate mounds of egg white mixture onto a parchment lined baking sheet, making a deep well in the center of each mound.  Bake for 3 minutes.
4.  Remove from oven and place 1 yolk in each egg white well.  Season with salt and pepper and bake another 2 to 3 minutes. 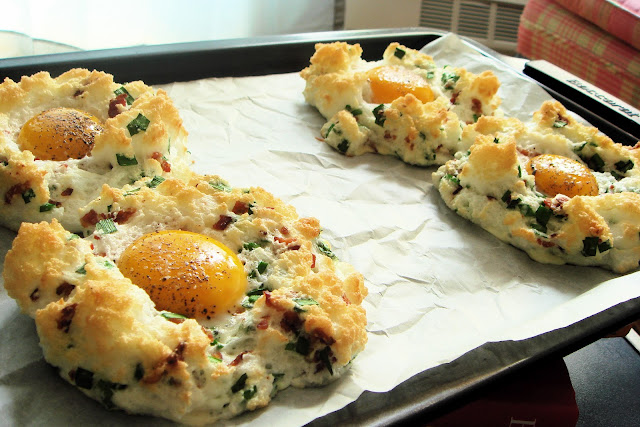 Posted by greenhorn gourmande at 8:23 PM

greenhorn gourmande
Brooklyn
An unabashed lover of all things food. The salty stuff is where I get my kicks, although I've been known to dabble in the sweet stuff on occasion. Read my ramblings for recipes, rants, and the occasional rabble-rousing.